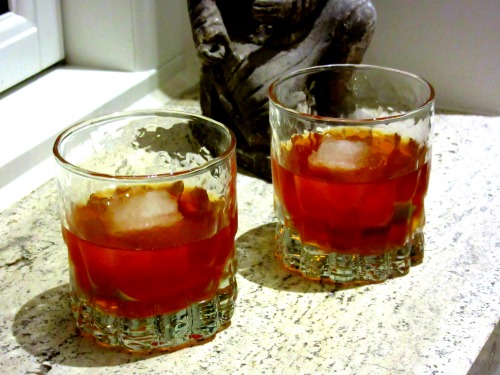 Sometimes it´s a challenge to stay within super classic old fashioned cocktails and still find new variants that trigger your senses in a new way, but the Suburban cocktail do exactly hit that sweet spot.

In my search to enlarge my list of great, classic cocktails I found the Suburban on this great page: Supercall. This page is btw. a good place for new starters within classic cocktails. Apart from having its own distinct finger print the Suburban is a very good alternative to a Sazerac or Old Fashioned.

Garnish with a slice of lime or orange peel

Stir it all in a mixing glass with lots of ice. Strain it into a low ball glass with one large ice cube and garnish with the peel.

In the original recipe it says: Ruby Port, but I prefer the less jammy aged Tawny Port. By adding the lime or orange drops the cocktail gets a better balance with the sweetness of the Myers´s dark rum and the Port.

This is a drink where you can experiment with the volume mix and different types of the liquor ingredients.

Most recipes you find have less volume on Port and Rum compared to Whiskey than given above. Find your own mix depending on your preference of the balance of smokey rye and the sweeter Port and Rum.

The Taste and smell:

If you could distill carved-oak paneling and club chairs, leather-bound volumes and three-cushion billiard tables, this is what you’d get. Mellow, robust, comfortable. The rum mellows the tang of the rye, the port tames the raw edge of the distillates, and the bitters add a touch of the exotic, like the stuffed head of that rare Asian gazelle that hangs over the doorway. Not a summer drink, but a very good alternative to when you would have made a Sazerac or Old Fashioned.

The Suburban was first published back in 1935, when The Old Waldorf-Astoria Bar Book first was published. Mixing port into a cocktail was quite more used than today and it gives the drink a tannic edge and winey fruitiness. Even so, the Suburban, a riff on the Manhattan, is a rare breed of cocktail—even for the ‘30s. A mix of rye whiskey, dark rum, bitters and port, the Suburban is deep and jammy with a round, velvety texture that hugs your mouth.

The cocktail has its roots in Brooklyn, where it was named for the Suburban Handicap, a horse race run in Sheepshead Bay when it originated in 1884 (the race is still run at Belmont Park annually).